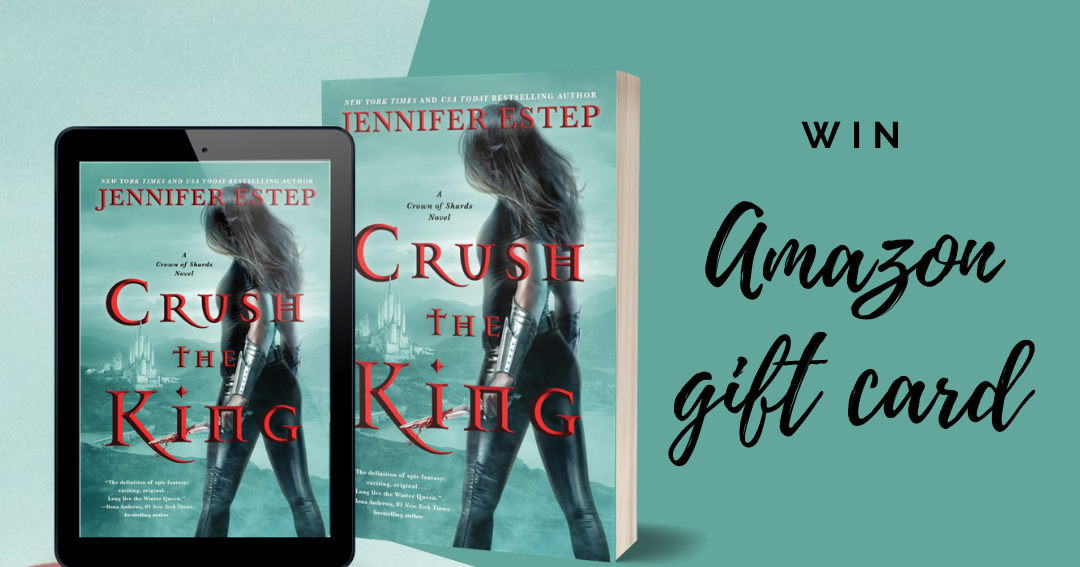 One reader will receive a $10 Amazon Gift Card from Jennifer! Open to International readers who can accept a USD Amazon GC A fierce gladiator queen must face off against her enemies in an epic battle in this next thrilling installment of New York Times and USA Today bestselling author Jennifer Estep’s Crown of Shards series—an action-packed adventure full of magic, murderous machinations, courtly intrigue, and pulse-pounding romance. Queen Everleigh Blair of Bellona has survived the mass murder of the royal family, become a fearsome warrior trained by an elite gladiator troupe, and unleashed her ability to destroy magic. After surviving yet another assassination attempt orchestrated by the conniving king of Morta, Evie has had enough. It’s time to turn the tables and take the fight to her enemies. There is no better opportunity to strike than during the Regalia Games, a time when warriors, nobles, and royals from all the kingdoms come together to compete in various sporting events. With the help of her loyal friends, Evie goes on the attack at the Regalia, but things don’t turn out the way she hopes. Soon, she is facing a terrifying new threat, and she will have to dig deep and learn even more about her growing magic if she has any chance of defeating her foes. Because to secure her throne and ensure her kingdom’s survival, Evie must think like a true Bellonan: she must outsmart and outwit her enemies . . . and crush the king. Buy CRUSH THE KING: Amazon.com | Kindle | BN.com | Apple Books | Kobo | Google Play | Powell's Books | Books-A-Million | Indiebound | Amazon CA | Amazon UK | Amazon DE | Amazon FR

How To Enter Giveaway

To unlock a Giveaway, you must complete a short market-research survey or offer.
This is done to make sure the giveaways are fair and honest, to combat bots and hackers from submitting invalid entries.
You will be rewarded for your time by allowing you to enter the giveaway.
Extra entries can be earned by sharing the page on your Facebook or Twitter.

We wish you good luck on your giveaway prize!
- The Think Giveaways Team